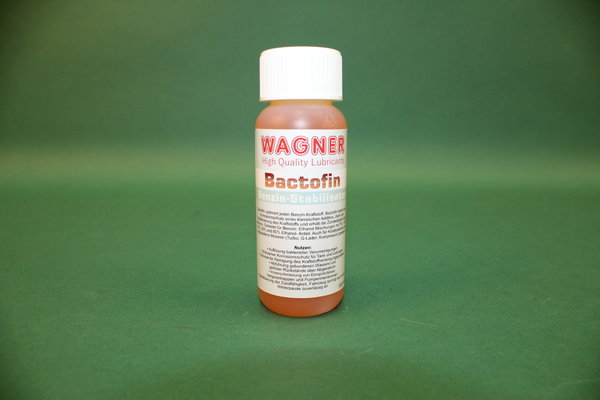 Gasoline stabilizer Bactofin 100ml gasoline additive for 2 and 4-stroke engines - 21693 E2 R01 F3 Gasoline additive for 2- and 4-stroke gasoline engines protects against corrosion and wear and also effectively cleans the entire fuel system. Ethanol in fuel - problem factor #1 Due to the increasing amount of biofuel that is now being added, water can collect in the tank because alcohol is hydrophilic. Water forms a perfect breeding ground for bacteria, yeast and fungi, which can then wreak havoc in the tank. Bactofin stabilizes the fuel One consequence of this is the decomposition of the fuel over long periods of standstill. This means: The vehicle no longer starts. Bactofin is used here as a petrol stabilizer, which is added to the petrol before longer periods of inactivity (e.g. overwintering). It thus prevents this "tilting" and keeps the petrol permanently stable. Bactofin protects the tank, carburetor, injection systems and lines from rust The alcohol content in gasoline has created another problem: rust in the tank. Here, too, the rust is the result of the bacteria that can live in the tank. They can form acetic acid. Acetic acid will attack any metal, promoting corrosion. Corrosion does not only occur in the tank, but also in the lines, carburetors and injection systems, i.e. in places where you can hardly see. Prevention is better than aftercare. With Bactofin to prevent rust. Bactofin cleans the entire fuel system The ethanol content in petrol contaminates the fuel with bacteria. These microorganisms cause foam and sludge, which gradually clogs the lines. With Bactofin, these impurities are removed and clogged pipes are cleaned with cleaning agents. Bactofin - the better lead substitute When using Bactofin, you can confidently do without lead substitute, since Bactofin also ensures the lubrication of the valves. scope of application Bactofin can be used as a petrol additive in all 2- and 4-stroke petrol engines, e.g. e.g.: Vehicles of all types and years of construction (oldtimers, youngtimers, new vehicles) Small devices such as chainsaws, lawnmowers, brushcutters, lawn tractors, ride-on mowers, leaf blowers, hedge trimmers, aggregates, etc. boats reserve canister Other possible uses are Wankel engines Engines with catalytic converters, turbo, G-Lader or compressors Bactofin is ideal for overwintering/decommissioning vehicles that have been parked for more than 6 weeks. Simply put Bactofin in the tank before the winter break, then fill up and start springing as usual. The gasoline stabilizer can also be used in gasoline-ethanol mixtures with 5%, 10%, 15%, 50% and 85% ethanol. Dosage of Bactofin Add Bactofin (best) to the petrol before refueling in a mixing ratio of 1:1000. Example: For a tank with a volume of 40 liters, 40 ml of Bactofin are sufficient. Suitable for: 2 and 4-stroke engines Type of application: cleaning of the fuel system, rust protection, stabilization of the fuel, valve protection Dosage: 1:1000 Flash point: > 65 °C Fuel type: petrol Viscosity (20°C, mm²/s): 10 ,38